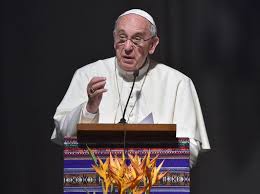 ahhhhhh . . . and I’m finding myself in a good place from which to listen to others’ messages, this morning Pope Francis’.

Let us together say from the heart: no family without lodging, no rural worker without land, no laborer without rights, no people without sovereignty, no individual without dignity, no child without childhood, no young person without a future, no elderly person without a venerable old age.

Not sure about this assumption:  “Many people are hoping for a change capable of releasing them from the bondage of individualism and the despondency it spawns.”

Seems to be the premise:  “And behind all this pain, death and destruction there is the stench of what Basil of Caesarea called “the dung of the devil”. An unfettered pursuit of money rules. The service of the common good is left behind. Once capital becomes an idol and guides people’s decisions, once greed for money presides over the entire socioeconomic system, it ruins society, it condemns and enslaves men and women, it destroys human fraternity, it sets people against one another and, as we clearly see, it even puts at risk our common home.”

You, the lowly, the exploited, the poor and underprivileged, can do, and are doing, a lot. I would even say that the future of humanity is in great measure in your own hands, through your ability to organize and carry out creative alternatives, through your daily efforts to ensure the three “L’s” (labor, lodging, land) and through your proactive participation in the great processes of change on the national, regional and global levels. Don’t lose heart!

“financial institutions and transnational companies are becoming stronger to the point that local economies are subordinated, especially weakening the local states, which seem ever more powerless to carry out development projects in the service of their populations”.

Ideological colonialism – the monopolizing of the communications media, which would impose alienating examples of consumerism and a certain cultural uniformity, is another one of the forms taken by the new colonialism.

The Bible tells us that God hears the cry of his people, and I wish to join my voice to yours in calling for land, lodging and labor for all our brothers and sisters. I said it and I repeat it: these are sacred rights.

1. Let us begin by acknowledging that change is needed.

Do we realize that something is wrong in a world where there are so many farmworkers without land, so many families without a home, so many laborers without rights, so many persons whose dignity is not respected?

2. You are sowers of change. – I am convinced that respectful cooperation with the popular movements can revitalize these efforts and strengthen processes of change.

3.1.  The first task is to put the economy at the service of peoples. Human beings and nature must not be at the service of money. Let us say NO to an economy of exclusion and inequality, where money rules, rather than service. That economy kills. That economy excludes. That economy destroys Mother Earth. A truly communitarian economy, one might say an economy of Christian inspiration, must ensure peoples’ dignity and their “general, temporal welfare and prosperity”.[1] This includes the three “L’s” [Land, Lodging, Labor], but also access to education, health care, new technologies, artistic and cultural manifestations, communications, sports and recreation.

3.2. The second task is to unite our peoples on the path of peace and justice. The world’s peoples want to be artisans of their own destiny. They want to advance peacefully towards justice. They do not want forms of tutelage or interference by which those with greater power subordinate those with less. Despite the progress made, there are factors which still threaten this equitable human development and restrict the sovereignty of the countries of the “greater country” and other areas of our planet . . . “financial institutions and transnational companies are becoming stronger to the point that local economies are subordinated, especially weakening the local states, which seem ever more powerless to carry out development projects in the service of their populations”. Ideological colonialism – the monopolizing of the communications media.

3.3.  The third task, perhaps the most important facing us today, is to defend Mother Earth. Our common home is being pillaged, laid waste and harmed with impunity. Cowardice in defending it is a grave sin.