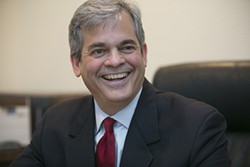 (Community Matters) Nice write ups on the four candidates, two serious ones at this point. One more on Saturday. A Jew, a Mexican and an African American – each from middle class backgrounds, first in families to attend college, each successful in their careers, each committed to giving back.

Mike Matinez did a good job too – of course spinning his eight years on the job. The one spin I can’t abide is he now calls for accountability while

he doggedly defended White Construction/JW Marriott while they were flaunting the terms of their City of Austin subsidy (a la fee waivers), refusing to pay required fair worker wages. I’m glad he’s come around.

Sheryl Cole has’t officially declared (she will Saturday) so not included in this round of Austin Chronicle profiles.