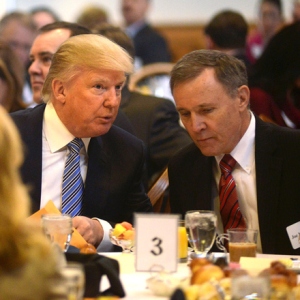 (Community Matters) In BuzzFeed: 36 Hours on the Fake Campaign Trail with Donald Trump.

a “Nixon-era trickster” who blackmailed reporters, lied constantly to everybody, and had, among other ploys, engineered an explosive feud in 2000 between Pat Buchanan and Donald Trump as part of a hazy scheme to help the GOP avoid a third-party threat. [the] consulting firm . . . . counts Trump among its clients.

The day after the 2012 election, I spoke with one of Trump’s confidantes about his political appeal to working-class men in flyover country. “If you have no education, and you work with your hands, you like him,” the confidante told me. “It’s like, ‘Wow, if I was rich, that’s how I would live!’ The girls, the cars, the fancy suits. His ostentatiousness is appealing to them.”