Steve Adler up by 21 points in Mayor’s Race 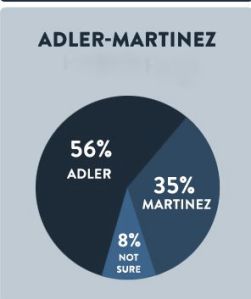 Steve leads in every demographic group other than tied among Austin Democrats and winning 40% of Hispanics’ support. And, I believe his support among both of these groups is strengthening since Mike’s silly 30-year reach back. I love what a friend at St James told me Saturday night, “if all Mike could find on Steve is something from 30 years ago & it wasn’t even about him, Steve must be a really good guy.”

A poll commissioned by the Austin Monitor shows that 56 percent of voters said they would likely vote for mayoral candidate Steve Adler, compared to 35 percent who said they would vote for his runoff opponent, City Council Member Mike Martinez. Only 8 percent of those polled indicated that they were undecided in the mayoral contest.

The poll was conducted by phone on Nov. 12 and 13 by Public Policy Polling of Raleigh, North Carolina. Jim Williams, who was in charge of the poll, said 846 Austin voters participated who said they were certain or likely to vote in the Dec. 16 runoff.

This is a considerably larger advantage than the Nov. 4 election showed. During that contest, Adler pulled in 37 percent of the vote and Martinez got 30 percent. Mayor Pro Tem Sheryl Cole had 15 percent and Todd Phelps got 10 percent. There were eight mayoral candidates in that election.

Williams said Martinez would be most likely to increase his numbers by getting more support from both Democrats and independents. Sixteen percent of those calling themselves independent said they were not sure whom they would vote for in the runoff election.

Among those groups, African-Americans were the most likely to say they were undecided, at 32 percent.

Last week, Martinez blasted Adler because his partner did some work for Koch Industries about 30 years ago. Adler called Martinez’s attack false and desperate. The Monitor asked Williams whether invoking the name of the Koch brothers could help Martinez. He replied, “The only people who get really mad about the Koch brothers are hardcore Democrats. We’ve seen it nationally and it didn’t seem to work too well.”

Peck Young, director of the Center for Public Policy and Political Studies at Austin Community College, said he was not surprised by the poll results. “I think the poll is pretty accurate. Mike’s got one fundamental problem, and that is that he’s an incumbent. There is a major change out there among the electorate. What kind of change, I think they’re trying to figure out, and I think the support for Adler reflects that.”

Young said he thought runoff elections in Districts 7, 8 and 10 on the west side of the city would help Adler in areas where he won the Nov.4 election. On the east side, he said, Martinez would be helped by runoffs in Districts 1 and 3. However, Hispanic voters in Districts 2 and 5, as well as other voters in those districts, may be less likely to turn out for the runoff, which could hurt Martinez.

Young added, “The most fundamental finding of the election is the voters want change.” He said although the numbers may not have reflected it on Election Day, he thought the poll gives a strong indication that Adler will win.

Public Policy Polling is a well-known and widely respected firm that works only for Democrats and progressive organizations. The poll was made possible through a generous donation by Texas Disposal Systems. TDS did not know the identity of the polling agency.