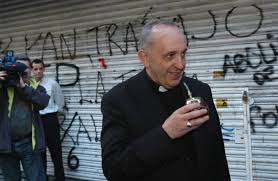 (Community Matters) Reuters, “Pope says gays must not be judged or marginalized”

Politico Playbook: TOMORROW’S FRONT PAGE TODAY – “Pope says gays must not be judged or marginalized,” by Reuters’ Philip Pullella in Rome : “Pope Francis, in some of the most conciliatory words from any pontiff on gays, said they should not be judged or marginalised and should be integrated into society, but he reaffirmed Church teaching that homosexual acts are a sin. In a broad-ranging 80-minute conversation with journalists on the plane bringing him back from a week-long visit to Brazil, Francis also said the Roman Catholic Church’s ban on women priests was definitive, although he would like them to have more leadership roles in administration and pastoral activities. He expressed pain over scandals at the Vatican bank during a remarkably forthright press conference, his first since being elected in March to replace Benedict XVI, who became the first pontiff to resign in 600 years. Francis said there were saints in the Holy See but also ‘those who are not very saintly.’ The airborne encounter with journalists ranged over issues as varied as the pope’s insistence on low-key security to his desire to slip out of the shackles of the Vatican to go for walks.” 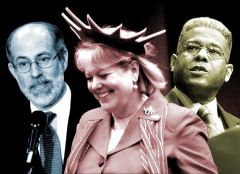 (Community Matters) A covert, right wing group is planning “a 30 front war seeking to fundamentally transform the nation,” according to my friend David Corn of Mother Jones. Fearing immigration reform, the group has even crafted a message for Senator Rubio to face-savingly abandon the Gang of Eight, “we can’t trust Obama to enforce immigration laws after the amnesty.”

Dubbed Groundswell, this coalition convenes weekly in the offices of Judicial Watch, the conservative legal watchdog group. During these hush-hush sessions and through a Google group, the members of Groundswell—including aides to congressional Republicans—cook up battle plans for their ongoing fights against the Obama administration, congressional Democrats, progressive outfits, and the Republican establishment and “clueless” GOP congressional leaders. They devise strategies for killing immigration reform, hyping the Benghazi controversy, and countering the impression that the GOP exploits racism. And the Groundswell gang is mounting a behind-the-scenes organized effort to eradicate the outsize influence of GOP über-strategist/pundit Karl Rove within Republican and conservative ranks.

One of the influential conservatives guiding the group is Virginia “Ginni” Thomas, a columnist for the Daily Caller and a tea party consultant and lobbyist. Other Groundswell members include John Bolton, the former UN ambassador; Frank Gaffney, the president of the Center for Security Policy; Ken Blackwell and Jerry Boykin of the Family Research Council; Tom Fitton, the president of Judicial Watch; Gayle Trotter, a fellow at the Independent Women’s Forum; Catherine Engelbrecht and Anita MonCrief of True the Vote; Allen West, the former GOP House member; Sue Myrick, also a former House GOPer; Diana Banister of the influential Shirley and Banister PR firm; and Max Pappas, a top aide to Sen. Ted Cruz (R-Texas).

“Other memorable quotes from the group’s memos:

There are plenty of groups that meet and coordinate political efforts. If you read David’s article which quotes from their Google Group, the hypocrisy of the Right’s outcry about a “liberal media” while they are coordinating messaging and stories with journalists and pitching Obama scandals is illuminating.