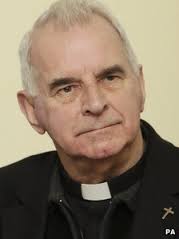 (Community Matters) Britain’s most senior Roman Catholic cleric, Cardinal Keith O’Brien has now acknowledged as truthful the allegations of sexual impropriety. Of course it’s not his sexual orientation which condemns him but his staunch conservatism within the church hierarchy that hypocritically condemns homosexuality and fights equality. NYTimes

His admission is a courageous step. I’ll pray for him and others.