(Community Matters) Sorry, I don’t buy that this man doesn’t know what he’s doing. Something about his ink prompts me to believe otherwise. 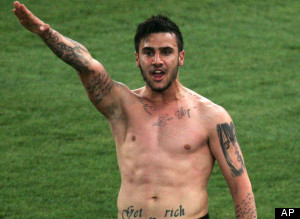 . . . . same with this CPAC attendee who questioned what slave owners had to apologize for, suggesting slavery was “feeding and housing” blacks. Similarly . . . . comments promoting the separation of races and how Republican women shouldn’t correct men in public. Nationalism is alive and well and scary.

I don’t mean to cast a wide net over all Republicans. It’s a fringe. Unfortunately, a fringe Republican candidates must appeal to in order to win Republican primaries.

update: reading the soccer player has now been banned