The alternative does not seek to win over the population but is designed to achieve very definable military objectives, from the destruction of facilities to harassing, engaging and possibly destroying enemy forces, including insurgents.

Special Operations Forces are highly useful for meeting these objectives, but we should also include other types of forces. The U.S. Marine Corps is one such example.

The type of government that Afghanistan has is not a matter of national interest to the United States. What is of national interest is that terrorist attacks are not planned, practiced or launched from Afghanistan. Neither occupation nor transformation of the social structure is necessary to achieve this mission.
Military intervention should be a rare occurrence; when it does occur, it should be scaled to the size of the mission.

The Mysteries of Marfa 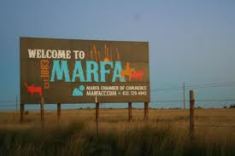