The Myth of Gay Affluence

(Community Matters) Not a surprise that the myth of gay affluence is not accurate. For decades only affluent gays could afford to be out, to show themselves publicly. Even today, too many women are afraid to come out as they worry about losing parental rights in custody battles.

In the Atlantic: nearly 40 percent of all homeless youth are LGBT

In reality, gay Americans face disproportionately greater economic challenges than their straight counterparts. A new report released by UCLA’s Williams Institute found that 29 percent of LGBT adults, approximately 2.4 million people, experienced food insecurity—a time when they did not have enough money to feed themselves or their family—in the past year. In contrast, 16 percent of Americans nationwide reported being food insecure in 2012. 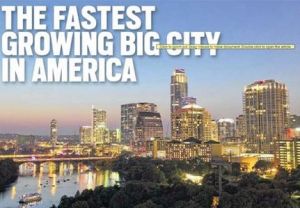 btw – Austin is also the 11th largest city in America*

Source: Based on U.S. Census Bureau population data for July 1, 2012 through July 1, 2013. Rankings are based on largest percentage population growth in metro areas with a population of one million or more.