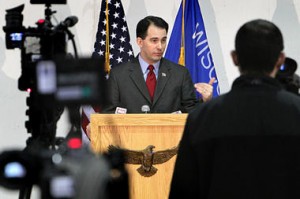 (Community Matters) I’ve avoided posting & blogging on the issue of the Wisconsin Governor’s (and evidently Koch brothers’) war on public employees, b/c it is so complicated. Of course public employees must come to the table in helping find solutions to our fiscal emergency – as must our willingness to tap rainy day funds & very selectively increase some taxes. Entrenched, underachieving teachers is another issue (there might be fewer than you think) – but Grover Norquist ideological agendas intent on shrinking and drowning government are at least as threatening to the American way of life.

Gov Walker’s overreach of aiming to bust the unions and rejecting their willingness to negotiate have mobilized their members, supporters & friends all around the country like no campaign could have done. This is huge in Wisconsin and even more so in Ohio.

Forbes saying Gov Walker has lost the war, even if he wins this battle

I didn’t read but am told Chris Hayes posted a provocative question: if we’re willing to impose renegotiation of contracts with retired state employees, why would we be unwilling to renegotiate terms with state bond holders?