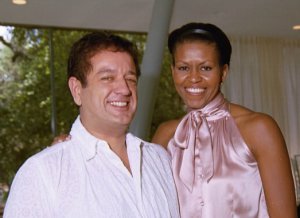 (Community Matters) by stonewalling & voting lock-step against the President’s stimulus and budget bills – despite serious inclusion in the negotiations and details of each – Congressional Republicans have proven that they’ll put politics before most American’s interests. I wholeheartedly support the President’s call for healthcare legislation by budget reconciliation, i.e., exclusion from filibuster rules. story here

(Community Matters) Houston Fifth Ward born, the first Black woman from a southern state to serve in Congress, her impassioned speech for the impeachment of President Nixon, expansion of the Voting Rights Act to include Hispanics, keynote address to the Democratic National Convention in 1976 (considered by many the best convention keynote of the 20th century), professor at the LBJ School and mentor to many, 1992 Democratic National Convention keynote address, 20-year partner to Nancy Earl.

The Hon. Barbara Jordan, 1936 – 1996 photo: Ricardo Brazzielli, AAS
If you haven’t seen our friend Max Sherman’s book Barbara Jordan: Speaking the Truth with Eloquent Thunder, treat yourself. It includes a DVD of her recorded speeches. It’s seriously good and inspiring.

is this really the first statue of a woman on the UT campus? good god, no wonder women get so pissed off at us

(Community Matters) After Graham Reynolds at Wooldridge Park and after Erection, Julie Thornton & Amy Rudy hosted a very fun after party at Spider House’s US Art Authority (which some might remember from our 2007 Xmas card).
Of course, Julie & Amy went all out, including flying in Los Angeles DJ Eddie Ruscha for the occassion and making sure Perrier Jouet & Patron flowed endlessly.

Pierre Rigal & Julie Thornton arriving at the party after Pierre’s performance of Erection
Julie’s presenting company, TestPerformanceTest (do check out her groovy website) brought in Pierre and Aurelien Bory, as well as the Israeli LeeSaar The Company and Maxi Geil & Playcolt.

an early snapshot of the crowd. It became quite packed

Shobie & Dean Partos manned the outdoor courtyard FuseBox table
I left around 11:30, intending to return after picking up our house guest, OFA Texas Director Luke Hayes. Alas, he wasn’t home yet. Understand many stayed until the wee hours of 1:30, most in the courtyard. 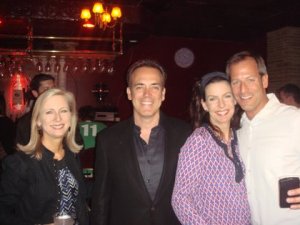 Cookie Ruiz, Jack McDonald, Carla McDonald & Kirk Rudy
Very excited about the possibilities for Ballet Austin’s The Light Project touring, especially in Israel. It dawned on us all we’ve got to engage our friend Manny Azenberg in this project. Kirk Rudy, Cookie Ruiz, Stephen Mills, Brent Hasty, Steve Adler, Tommy Meredith, Lily Yigal and Abe Foxman already working on this – now I suppose, me & Steven too.

Wouldn’t be surprised if Graham could tell I have a school boy crush on him.  Who doesn’t?  Alas, he’s straight and quite taken by Rude Mech’s Shawn Sides.  hmm, come to think about it, I believe Graham is a member of the Rude Mechs Company as well.  One of (if not the) Austin’s most prolific composers and musicians, Graham created a 50 percussion piece including different representations of “parades & processionals: a painting brought to sonic life, a film score with the film remover, and more.”
Way, way fun.  Lisa Moore’s two young sons even joining Graham on stage at one time. 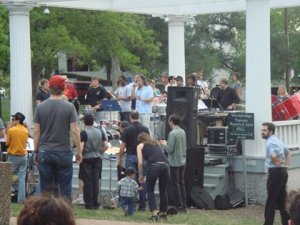 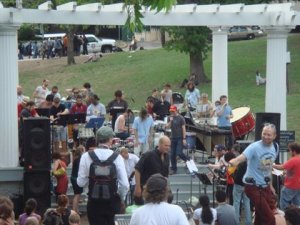 DJ Cimbala & Steven, Marion just off to the right side 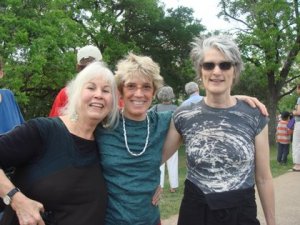 DJ about to lead us in the processional to Ballet Austin