The Science of Generosity 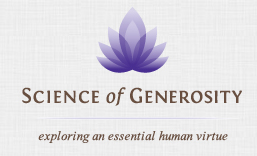 (Community Matters) The University of Notre Dame has launched a research effort on the Science of Generosity. It was established in 2009 with a $5 million grant and grew out of Smith’s work on Passing the Plate: Why American Christians Don’t Give Away More Money

Generosity – the virtue of giving good things to others freely and abundantly.

some of their research:

In a September 2012 paper in Nature, Harvard University researchers David Rand, Joshua Greene, and Martin Nowak conclude that when given the choice, our innate first responder–intuition–is pretty generous. But in a span of just 10 seconds, a stingier impulse arises, and the cooperative impulse decreases dramatically.

Perhaps our interest in generosity isn’t declining, it’s changing and in need of new models for expression. A 2010 paper in the Proceedings of the National Academy of Sciences by James H. Fowler and Nicholas A. Christakis, revealed that social networks inspire greater generosity.

Our gut reaction is to give, according to a study published by Harvard scientists who teased apart the workings of people’s minds when they’re asked to contribute to the greater good at their own expense. Only upon reflection do we become greedy.

Churchgoers like to think of themselves as generous and cheerful givers, but for many the flesh appears to be weak when it comes to living up to their own standards for charitable giving. A quarter of respondents in a new national study said they tithed 10 percent of their income to charity. But when their donations were checked against income figures, only 3 percent of the group gave more than 5 percent to charity.

An interdisciplinary team of faculty working with Arizona State University’s Center for the Study of Religion and Conflict are exploring what motivates people to be generous and how religion influences their actions. Muslims strongly feel that if they are blessed then they have an obligation to God to share with those less fortunate than themselves. They also feel that they are following in the footsteps of the Prophet Mohammad by being charitable to others. Catholics don’t see an obligation to God as a primary motivator to help others; instead, their love for Jesus motivates them to help others.