I’m not a huge fan of musicals and we enjoyed Kinky Boots. They were having an off night, a few voice issues by the two male leads and, frankly, the choreography surprised me. Each of the stars (both male leads were nominated for best actor in a musical – Billy Porter won – and the female lead for best actress) had spectacular moments – Annaleigh Ashford was consistent tonight and nearly stole the show. Though impossible to steal the show from Porter, his character too sympathetic.

We’re glad to have seen each.

The metro area is now home to 67 cooperatives that generate almost $1.2 billion in annual revenue, according to data compiled by Cooperation Texas. They include everything from credit unions to housing co-ops, and from Wheatsville (the state’s only food co-op) to the sprawling electric cooperatives outside the city.

(Community Matters) We’ll hear their decision during the next two weeks – on either a Monday or Thursday. The Supreme Courts decision on Prop 8 is likely to be limited, upholding the overturn of Prop 8, thus ruling same sex marriage in CA legal but limiting the decision so that it’s a state by state decision. 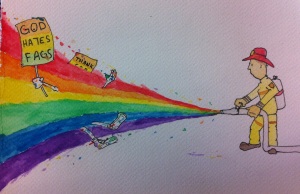 In the U.S. vs Windsor case, I expect they’ll overturn DOMA, allowing federal benefits to couples *recognized as married in their states.* This will be super and, hopefully, will render the immigration legislation’s exclusion of LGBT couples mute. For us personally, it’ll be bitter sweet. While we’re married (were legally married in Canada), our marriage is not recognized in Texas. We’ll have to reexamine the costs of Texas residency.

Dinner for Friends in NY

(Community Matters) so much fun hosting dinner last night for our young friends in Mother Falcon. They’re in NY for 3 weeks, playing NY, Boston, DC – staying in a big house in Queens, sharing cooking, cleaning and roadie responsibilities. It’s sort like a traveling commune – all young, bright, highly talented and motivated artists. Steven and Luke Hayes hosted while I arrived a bit late coming directly from the airport. After, beers at a new find, a cool outdorsey place, B Bar & Grill on E 40th with Luke & Chris.

(Community Matters) Steven gave the keynote at this year’s showcase – a bit about it in Silicon Hills.